So, we’ve dealt with Master, but the Doctor’s feeling the after-effects of his meddling and, indeed, is pretty depressed by it all. The rest of the TARDIS crew notice she’s down, but she’s not sharing. She’s really not one for sharing, this incarnation. She’s kind, she’s very kind, and she doesn’t hate – the 12th Doctor’s final lines seem to remain her mantra. But he didn’t tell her to trust or share. So, she’s brooding like anything.

But that’s okay, because Graham has found some coupons – let’s force the Doctor to have sone time off, because that always goes well. It was a kind thought, anyway, and the rest of crew probably needed it. What’s the point in having all of time and space to choose from if you can’t have some luxurious downtime ever so often? Well, because it never works out that way. (Although, one could also argue that the TARDIS, with its copious library, swimming pool, butterfly house, and whatever else it has in it’s vast interior, has more than enough to provide).

Interesting to see the repeated trope in this story though. Traditionally, the TARDIS crew have been isolated adventurers, sailing the vortex without any kind of concrete relationship with the wider universe beyond their actual adventures. However, this story, like Kerblam! last year, gives us the impression of them being citizens of the galaxy with genuine commercial interactions. Part of me doesn’t like it, but it’s been a common trope of Big Finish stories for a while, and it is nice to be given the impression of a slightly more mundane interaction with the universe. Essentially, I struggle to believe someone could exist for over 2 millennia and never take part in a loyalty scheme or end up with a few library fines.

The initial arrival had some lovely character moments. Graham is fully equipped, mentally and physically, to handle a package holiday, Yaz and Ryan are happy to take it for what it is, it’s just the Doctor who’s a little twitchy. 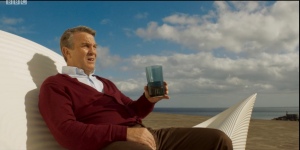 There’s a very good reason she’s often blamed for the fact that something always goes wrong. She really does go looking for trouble.

There was a lot to enjoy in this episode: Ryan’s hopper virus was a wonderful comic moment, and his flirtation and friendship with Bella worked very well and reminded me strongly of Barbara’s various romantic liaisons in the early years. And, overall, the story gave us a delightfully realised alien holiday resort and some highly enjoyable, if slightly cliched, characters.

There were some frustrations, though. While I loved the Doctor’s initial characterisation: the quite high-handed way she took control was almost classic Pertwee; I found her a little inconsistent at times. One moment she was making it absolutely clear that it was Kane’s job to go out and search for Benni, the next she was having a go at Kane for taking them out on a suicide mission. And then you have a reminder of her high level understanding of advance engineering in one scene, and ten minutes later she’s sending out a barely competent engineer to do the most technically difficult and important part of the job.

Then there was the character of Bella. I couldn’t buy the motivation, especially when it came to the reality of their life and death situation. Sure, blow up your estranged parent’s life work, but to carry it on in those circumstances? Had that confrontation occurred earlier, before the reality of how dire their situation was, I’ll have understood. But, when it came, I was thinking, “You seriously want to discuss this now? Undermine all attempts to save people now? Really?”

That aside, though, this was a highly enjoyable base under siege story with an important, if slightly high handed, message to put across. They split the various groups across the story well, driving the plot across three different and meaningful viewpoints at a time, giving the impression of a genuine threat and fight for survival. Wasn’t overly impressed by how little some of the characters were used – quirky canon fodder rather than any real attempt to give them a role in the story, but within the scope of a 50 minute episode that is perhaps understandable.

Seemingly, the most controversial part of the episode was the Doctor’s final speech about global warming. Reactions ranged from genuine pleasure that the show is advertising an important point, to frustration at the lack of subtly displayed, to anger that the show dared to move from fictional danger into a genuine warning about the future towards which we are currently heading. How dare a show about a scientifically minded person who spends their time trying to save worlds from disaster mention contemporary scientific thinking about the way we are heading into disaster if something isn’t done to stop it. But there we have it. It was never going to please all people. But really, it’s hardly the first time the show has gone Eco-warrior.

What intrigued me, though, is the concept of time travel at play here. As a Time Travel show, it’s perhaps unsurprising that the show avoids serious discussions into the concept. (It’s a pretty complex subject and look into too seriously and it becomes nonsensical – just look at End Game’s very self-aware attempt). Normally, however, Doctor Who adopts a very simplistic space/time tourist model – as long as you don’t influence major events, you’ll essentially have no genuine causal effect on the past. Meanwhile, the future and alien planets are fair game. When Doctor Who becomes a little more self aware, the model for time travel seems almost to become a little more deterministic: all of time, past and future, is fixed, including temporally travelling brings, and that if you travel back to the past, you were always part of the past. Equally, the present and future. You have as much causal influence as everyone else, and if you happen to invent spaghetti, it will always have been invented by you, unbeknown to your earlier self. The difficulty here is, of course, that it undermines the power of the Time Lords. The Doctor Who universe is fundamentally a non-fatalistic/deterministic universe. Events from the past can be influenced and rewritten. The Doctor and some of his enemies, at least, need to be able to have some influence. Then we get the horrible idea of fixed events: something introduced to justify non-meddling in the past, but that really seems utterly non-sensical (insofar as, if certain events are fixed, cause and effect clearly means that all events are fixed, for example, it was impossible for the Doctor ever to be killed prior to his death by River Song). However, if we take that particular concept aside for one moment, and allow for the idea of a more possibility-based time travel concept, like the one played a little with in End Game, we end up with what seemed to have been suggested at the end of this episode (and something entirely compatible with what seems to have been taking place in the Time War): namely, that the post global-warning destroyed Earth is only one possible future and that might not happen, not purely by the influence of those time travellers in the know, but by all humans with free will and agency. The Doctor seems explicitly to suggest that the very events they’ve just not only witnessed by been part of may never, in fact, come to pass it humanity gets its act together.

The reason this struck me, is that the implication did seem to be that, in the reality witnessed, Earth dies through global warming in the near future: Earth never reaches the stars. This implies that, in the most likely possible future currently, the events of New Earth never occur. What’s more, that means that companions like Stephen and Leela would never have been born. And that is such a timeywimey confusion (but seeming far more compatible with a more sensibility, agency-based conceit of time travel) that it seems entirely clear in thinking about it why Doctor Who has always veered so very far away from giving that kind of freedom rant scope. It really is a head fuck.

Which is a very long piece of discussion for what was almost certainly just supposed to be an off the cusp comment about how it’s not too late to stop humanity from fucking up.